A sure sign of the changing seasons is a procession of sweeper trucks combing the metro for their annual spring street sweep. Street Maintenance Manager Matt Morreim, who has worked for the City of Saint Paul for nearly a decade, manages the multiple crews who criss-cross the city, clearing the curb of gravel, grit, and leaves. In a single year, they pick-up approximately 15,000 cubic yards of debris, one truckload at a time.

During Saint Paul’s residential sweep, which happens just twice a year, each crew consists of eight people who work with precision to maneuver their vehicles through the neighborhoods. The team includes a flusher, two sweepers, two truck drivers, two sign posters/pullers, and a supervisor. A crew usually covers twelve to fifteen miles each day, with a complicated choreography of trucks that spray, sweep, and collect debris on the street, then deliver it to licensed facilities for composting and re-use. In total, they clean over 1,200 miles of curbside that flank the 600 miles of residential streets throughout the city. It can take weeks, or in some suburbs, months to accomplish. 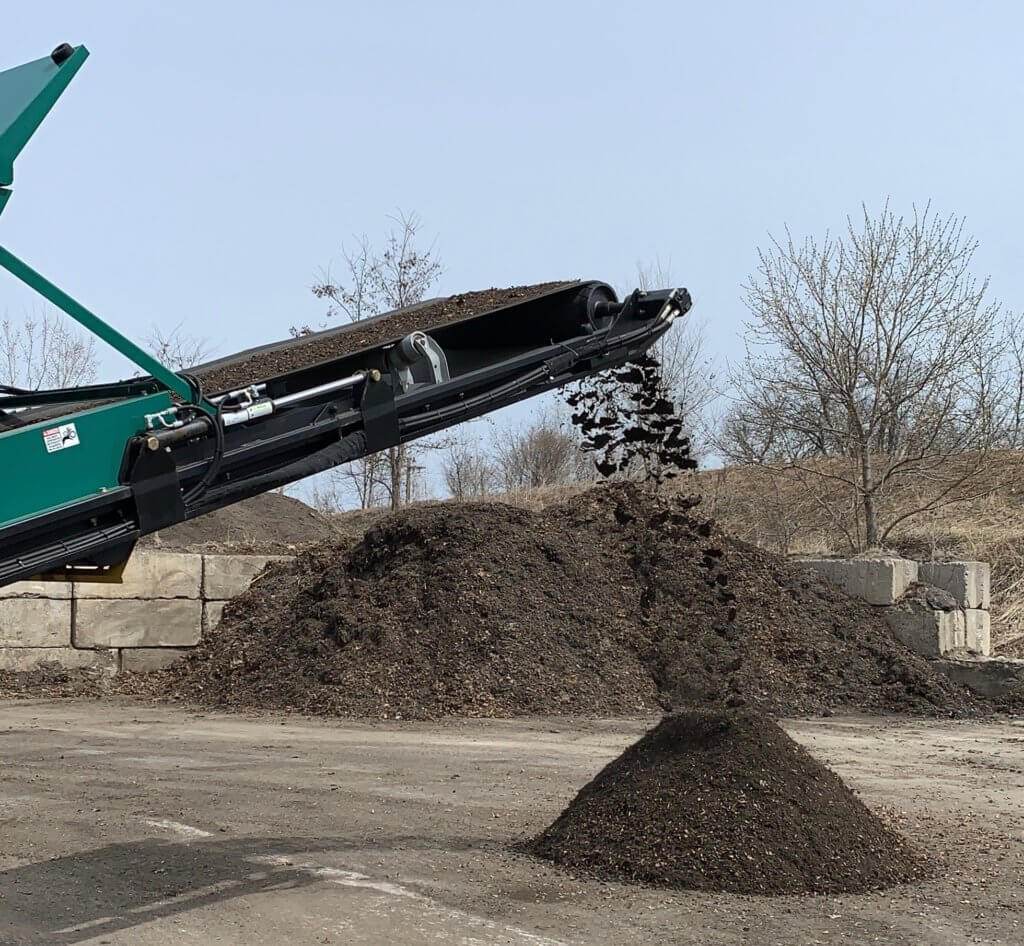 After sifting, the remaining trash is painstakingly hand picked out of the leaves, and no matter how efficient the trommel screen is, certain items like crumbling styrofoam and cigarette butts remain a problem. Even more sinister are microplastic pollutants that abrade off plastic litter as it sits in the gutter. These tiny plastic particles end up in the waterways, harming aquatic life, and they can build up our drinking water sources.

Blaine anticipates being able to reuse 90% to 95% of their street sweepings.

Residents who commit to cleaning up around storm drains in their neighborhoods play a crucial role by keeping them clear of debris between the city’s fall and spring sweeps. According to the Capitol Region Watershed District, Adopt-a-Drain participants removed more than 12,000 pounds of debris from Saint Paul streets last year. If those grass clippings and leaves had been allowed to wash into the storm drains, it would have fed over 1,000 gallons of algae growth on local lakes and rivers.

The misconception that city street sweepers double as a residential leaf pick-up service is a costly problem for many cities. When residents push extra debris into the street, the moisture that collects under the leaves and grass causes it to stick to the pavement, making it much more difficult for the city to thoroughly clean up.

In fact, clearing your drain in advance of a street sweep can be especially helpful. When you see the no parking signs posted before the city comes to your block, consider cleaning up around any nearby storm drains before the trucks arrive. Simply clearing material out of a storm drain grate and leaving the debris by the curb outside the catch basin can make the city’s work on your block go a little faster. “Every little bit helps,” Matt said.

Rebecca Haug, Blaine’s Water Resources Manager, sees the role of citizens as integral to the fight to protect our waterways. She encourages everyone to take pride in defending our lakes and rivers. Although the street sweeping can’t make it to every block more than twice a year, she reminds people that they can make a difference: “You are the city.”

Low Salt, No Salt Minnesota Campaign Rolls Out
A new education and assistance campaign - Low Salt, No Salt Minnesota - aims to teach and empower decision makers at homeowners…
Read full post
Leave the leaves in your yard—but not in the street
​If you are a reader of a certain age, you may have wondered, ‘Where have all the lightning bugs gone?’ Just because many of you…
Read full post
Clean In and Clean Out . . that includes your bait, too
Great news! 90% of Minnesota Lakes are still free of invasive species, so let’s keep it that way. This means, after a day of…
Read full post
Planting Shorelines to Protect Water Quality
The city of Blaine is home to a unique, man-made body of water: Sunrise Lake. Dug nearly 20 years ago, Sunrise Lake won’t appear…
Read full post